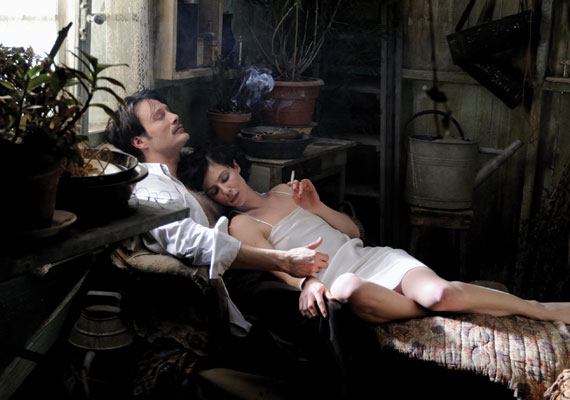 The balance in biography movies between putting in what the person was famous for and treating them like a human being that has lived and breathed at one point or anther in history is precarious. If not handled correctly, then the viewer either does not understand why they should be paying attention to the subject’s life (i.e. it is too boring) or it becomes a roll call of the famous sayings and deeds that the person did. This becomes particularly hard if you are dramatizing something between two famous people who may or may not have actually happened. This is issue that comes up again and again in Igor Stravinsky and Coco Chanel from 2009.

I picked this movie off of my Netflix queue for a couple of reasons. One: I love Mads Mikkelsen. I think he is quite honestly amazing in everything he does and he is the best Hannibal Lector ever. He is able to transform so completely into a character, that sometimes it is hard for me to believe that the same actor played the distant yet emotional father in After the Wedding and the idealistic doctor in A Royal Affair. I wanted to see how well he could pull off someone as closed off as Igor Stravinsky. Two: I have been reading and studying about the Rite of Spring by Stravinsky and its first performance by the Ballets Russes. I was interested in how this dramatic moment in ballet and classical music history (The legend goes that when the Rite of Spring was first performed, the French audience members rioted at the blasphemy of such a strange performance. Atonal notes, strange movements and crazy costumes were not what a high-class French audience were used to. However, rioting may have been a little bit of an exaggeration.) would be depicted on film. Three: In the same class that I have been studying the Rite of Spring, I had the privilege of learning from a professor who just recently published a biography on Coco Chanel. Chanel was a shrewd businesswoman who led a cold and distant life. She took advantage of people and exploited her workers. And yet she was still a woman who made extraordinary strides in the world of fashion at a time when most women were not doing so. My professor found certain aspects of Chanel’s life repugnant and yet found her compelling enough to study her for six years and produce a well-rounded biography. To delete certain aspects of Chanel’s personality would be doing an injustice to who she was yet to make a love story with a woman who is not that sympathetic would be hard to do. I wanted to see how the filmmakers accomplished this dilemma. Each of these three reasons was not enough for me to like the film enough to recommend it to anyone.

Stravinsky’s work and Chanel’s work are both combined here and yet it felt like at no moment did I get true insight on how they influenced each other, or how they came up with the ideas they did. It felt like at several moments in the film that the filmmaker and screenwriter took the famous person in a certain direction only because at this time in history that is what they were doing, whether or not it related to the plot. At one point in the movie, Chanel goes to a perfumery in order to make her iconic Chanel no. 5. The entire sequence does not show any character development, any forward plot movement or anything beyond that she picks the fifth perfume concoction thus coming up with the name Chanel no. 5. It is the most obvious of these digressions and the one I groaned at the most and yet the movie is littered with these terrible allusions to the aspects of their characters that made them famous.

Chanel was a cold person. She was not a typical romantic lead. In this movie, they tried so hard to stay true to the person as she was in real life, that she became a cardboard cut out of a character. Yes, Chanel was beautiful. Yes, she wore the best clothes and was obsessed with her shop and creating her own brand. But that was about all that you learn about her here. At no point do we understand why Chanel decides that Stravinsky was the perfect person to have an affair with, nor do we understand anything about her attraction to him other than she likes his music. At no point is there any insight into the internal character of Chanel. She does not grow or become any more life-like. There is no understanding her.

This is in contrast to Igor Stravinsky. Clearly the filmmaker and screenwriter liked Stravinsky more than Chanel. We sympathize with him at certain moments in the movie when it makes the least sense to do so. For instance, his wife finds out that he is having an affair with Chanel. She confronts him in their bedroom in the least confrontational way possible. She says several things to him that allude to the affair. However, she finishes her speech by saying that she doesn’t want to die. She is very sick and she feels she is rotting away which is why Stravinsky goes to Chanel instead of staying with his wife. This is a diabolical action and should be treated as such, and yet the filmmaker seems to be saying what a weight this sickness has produced for Stravinsky. He has not other choice than to go to Chanel and make love to her. Mikkelsen tries his hardest to convey the conflicting emotions that the man must have felt at this moment, if this indeed did happen, but he is not helped by the writing or even the following scenes. There is a way to show a toxic love affair, but this film does not do that. Instead it is content with just showing us long sequences of Chanel and Stravinsky having sex in the least romantic way possible. There is no attraction between the two people and therefore there is no spark in these love scenes. They are just using each other.

This is a cold movie that disappointed me to no end. This could be a compelling story if handled correctly, but it unfortunately was not. Both Stravinsky and Chanel deserve better treatment than this. One cannot become someone else by merely surrounding themselves with the accomplishments that person made.